You might have heard this debate when munching on either of them. It might be hard to distinguish them, and we usually use the two names so interchangeably, people often become reluctant to spot the differences between them.

However, any skilled baker or chef will easily tell you the differences, and there are quite a few ways to identify and distinguish them. This article will give you some insight into the cupcake vs. muffin debate.

Key Difference Between Cupcake and Muffin 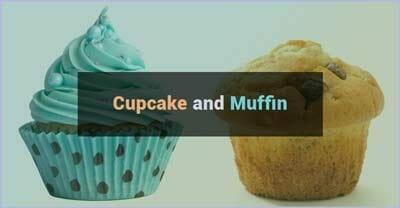 There are several differences between a cupcake and a muffin, and this article will try to highlight them. They range from small to big, but all of them can help you distinguish what you eat.

Cupcakes make use of butter and include much higher sugar content. Cupcakes, as the name suggests, are smaller cakes. As a result, they also include other ingredients commonly found in cake, such as vanilla essence and chocolate.

Muffins tend to have lower sugar content. They also tend to substitute butter with vegetable oil or other healthier alternatives. And they also use oat flour instead of all-purpose flour. To make muffins unique and tasty, ingredients such as dried fruits and nuts are added.

The main difference, as you can see, is the amount of sugar and how one uses butter, and the other doesn’t.

2. Differences in Batter and Process 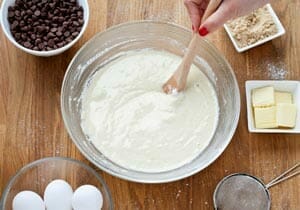 The batter made and the steps taken to make it differ between the two and is one of the essential differences that go unnoticed. Cupcakes are made out of a much softer and smoother batter. The butter and sugar are mixed to make a fluffy batter.

They are made similar to cakes using creaming methods such as the chiffon method, which involves folding egg whites into batter. The ingredients used are often whisked many times to ensure that no lumps form.

Batters used to make are a bit harder and not as smooth. This makes them much denser than cupcake batter. They are made using the muffin method, which involves using two separate bowls. 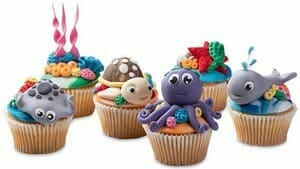 Due to how different the batters are, this also results in a different texture for the two.

Cupcakes have a much softer texture and are easy to bite into. They are never crispy or dense as muffins. And they tend to not have many fillings inside.

Muffins have a bit harder texture than cupcakes. They are denser and feel more like munching into bread with fillings like nuts or fruits in them. Muffins, in general, are meant to be savory foods in contrast to the sweet taste and softer texture of cupcakes.

5. Difference in Preparation and Storage 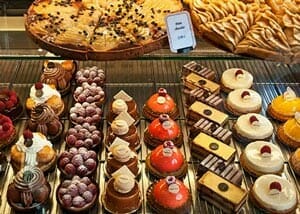 Cupcakes are generally prepared and eaten cold. They are similar to cake and pastries and stored in the cold. High temperatures affect them badly and can ruin them.

Muffins, on the other hand, don’t have any problems with either temperature. They can both be served hot and cold. They also don’t have much difficulty storing.

6. Difference in Size and Shape 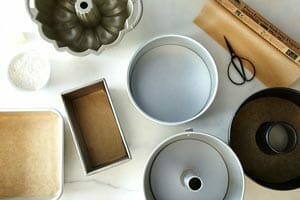 While there is no set standard for size as it can depend on how much batter a particular baker uses, cupcakes generally aren’t as big as muffins, and their tops do not exceed or flow out of the cup they are made in. Usually, toppings or frostings are added onto the top for a cupcake.

Muffins, however, are a bit larger as they are made to overflow the cup and create a larger top. This is what gives them a mushroom head shape, which is often associated with muffins. 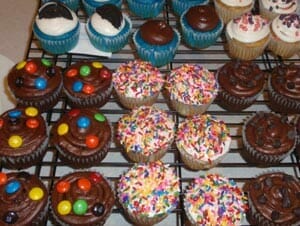 This is probably another essential difference and one of the defining differences between the two.

Cupcakes always tend to have frosting or cream on top of them. While the flavors vary, whether or not it comes with frosting on top is often the feature that people identify cupcakes with. This adds to the sugary taste of cupcakes.

Muffins do not have frosting or cream on their tops. They either have some sprinkled sugar on top or a thin layer of glaze. The highlight of muffins is the bread itself and the additional fillings.

If you've ever been to a bakery, you've likely encountered the debate between muffins and cupcakes. Both are delicious treats that can be dressed up with various toppings, but which one is right for you?

Muffins are a classic breakfast food but can also make a delicious snack. They are usually made with a combination of flour, sugar, egg, and either oil or butter. Muffins are denser and more filling than cupcakes and often flavored with fruits, nuts, and other wholesome ingredients.

Cupcakes are a great dessert option. They're made with a sweeter cake-like batter and topped with sugary frosting. They are lighter and fluffier than muffins and can be dressed up with various decorations. They are popular for birthdays, parties, and other special occasions.

At the end of the day, the choice between muffins and cupcakes comes down to personal preference. If you’re looking for a quick breakfast option, then a muffin might be your best bet.

A cupcake, alternatively, is the way to go if you want something sweeter and more festive. Either way, you'll be sure to enjoy a delicious treat!

Muffins are a beloved snack for many people, but the question of whether they can be part of a vegan lifestyle has become more common.

The answer to that depends on the ingredients used to make the muffin. Most store-bought muffins contain animal-based ingredients, such as eggs, milk, and butter. But it is possible to make vegan-friendly muffins using plant-based ingredients like flax eggs, almond milk, and coconut oil.

These vegan versions of muffins are just as delicious as traditional ones and can be enjoyed by vegans and non-vegans alike. So, if you're looking for a vegan-friendly snack, consider making a batch of vegan muffins for a tasty and nutritious treat.

Is a Cupcake Vegan-Friendly?

The answer to the question, "Is a cupcake a vegan food?" is not a simple one and depends on the ingredients used.

Generally, cupcakes can be vegan if they are made with plant-based ingredients like almond milk, coconut oil, and vegan butter. If the cupcake recipe contains animal products such as eggs, milk, and butter, it is not vegan.

Additionally, standard cupcakes may contain animal by-products and other non-vegan ingredients, so it is essential to always read the label before purchasing. Overall, vegan cupcakes can be an excellent option for those who follow a vegan diet.

With the right ingredients, you can create delicious vegan cupcakes that everyone can enjoy. Just make sure to double-check the label to confirm that the cupcakes are vegan-friendly.

Can You Use Cupcake Tools to Bake Muffins?

Cupcakes use a light, airy batter to create a fluffier texture, while muffins have a denser texture because of a thicker batter. Therefore, cupcake tools won't give you the same results when baking muffins as muffin tools.

Additionally, cupcake tools often have larger cavities than muffin tools, so your muffin batter won’t cook evenly and could end up with a dry texture.

If you want to bake muffins, it's best to invest in the right tools for the job. Muffin pans, tins, and utensils can all be found at your local baking supply store. With the right tools, you can make delicious muffins that will be a hit.

Q1. What is the difference between muffins and cupcakes?

Ans: The main difference between a muffin and a cupcake is that a cupcake is sweeter than a muffin. Muffins tend to include healthy ingredients like fruit and nuts, whereas cupcakes often have frosting or icing.

Q2. Are muffins healthier than cupcakes?

Ans: Generally speaking, muffins are considered to be healthier than cupcakes, as they contain ingredients like whole grains, fruit, and nuts, which are healthier than the white flour and sugar found in cupcakes.

Q4. Are muffins or cupcakes better for breakfast?

Q5. What is the difference between a muffin top and a cupcake top?

These are the primary differences you’ll tend to notice when comparing muffins and cupcakes. Next time anyone brings up the muffin vs. cupcake debate, you’ll be ready to easily solve their confusion.

Our Other Accessories Reviewed By Expert: