When we run out of all other vegetables, potato alone can save the day! There are a hundred ways to cook this root produce and each of them taste amazing!

In addition to their original form, potato can also be transformed into other kinds of ingredients. Two of the most popular options among them are potato starch and potato flour. It is very easy to get confused between the two since they both seem to be packed with carbohydrates and coming from the same source.

You may ask is potato starch the same as potato flour?

However, there are in fact quite a few differences between them which may surprise you! Here we are going to discuss these factors in details by comparing potato starch vs potato flour.

What Is Potato Starch

Potato is a great source of essential nutrients like carbohydrates. Like most other carb-filled food items, this one also holds a significant amount of starch. All this starch comes from its tuberous roots whose cells contain lots of leucoplasts. By extracting this component from the potatoes, we get potato starch.

According to historical records, the potato starch was first prepared centuries ago in Peru around 200 AD. Then the Spaniards brought it to Europe during their conquest at the South American regions in the 1570s. Since then, the European farmers have been producing it for cooking and other purposes.

The potato starch is prepared by extracting starch grains or leucoplasts from the vegetable. In one tuber, you will find about 65% to 80% starch. If you ever get to see how it is prepared in the factories, you will see the potatoes being rinsed well by machines.

These cleaned up potatoes are then crushed mechanically so that their starch grains come out. It is basically obtained from the cull pile, waste streams and any surplus of the processed potatoes. Dirty particles are removed from the cull and surplus potatoes by cleaning up with flume water.

A sharp blade like that of a saw or hammer mill crushes down the clean potatoes. Chemicals like sulfur dioxide are used in this stage so that it doesn’t get oxidized and the color remains unchanged. Unnecessary elements like fiber and skins are removed from this mashed potato.

Then the starch is separated from here and filtered to eliminate soluble material. After going through a few more purification methods, it is dewatered and then dried to achieve the final product.

What Is Potato Flour?

Another way to pack in the inherent carbs is to use potato flour in your recipes. It doesn’t go through too many complex chemical processes and thus retains the natural potato flavor to some extent. The potato flour is basically a whole food where you can find all the perks of its original form!

The French were the first to prepare flour out of potatoes. Three centuries ago, in the middle of the 1700s, they came up with this idea when wheat flour started to be costly and scarce. Since potato was still easily accessible, the peasants in France started to turn it into flour and bake delicious bread from it.

If you want potato flour to try out a new recipe, you don’t have to visit the super shop or wait for them to restock it! Just make a batch by yourself!

In order to get 1 kg potato flour, you will need about 4 kg potatoes. Peel them up a peeler, boil them and make some good mashed potatoes first. Then lay it out on the dehydrator and let it dry for at least 12 hours. Patience is the key here.

When the mashed potato has dried up perfectly, put it into a blender. If your device is not working, rely on the good old mortar and pestle.

Another way to get potato flour is to peel and grate the clean raw potatoes. Put these slices in boiling water for a minute and transfer it to the dehydrator.

No matter which method you go for, the resulting potato flour must be kept in an airtight container for proper storage.

Potato Flour Vs Potato Starch: What Are The Differences 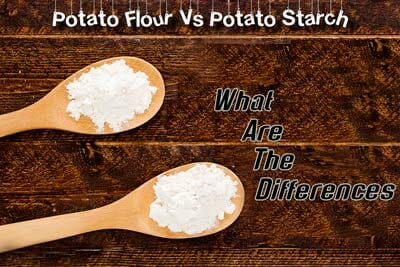 Potato starch needs to be produced in a commercial environment since it requires many steps and involves certain complications. On the other hand, making potato flour is so easy that even you can prepare it from the comfort of your home.

You don’t need to separate the starch to make potato flour. All you have to do is wash, peel, boil or blanch and then dehydrate for 12-24 hours. So the majority of its required time is spent on waiting. With minimum effort and usual household pieces of equipment, you can get your very own potato flour.

Some of the reasons why potato starch is used extensively in the gluten-free bakery are its high binding power and low gelatinization temperature. Besides, you will have an easier time with it since the potato starch is less likely to cause yellowing or foaming in a solution.

The potato flour can dissolve in cold water and is a little heavier than the starch. It also has a much higher viscosity than the usual flours. Since it absorbs a lot of water, potato flour is used for making baked items moister.

They both are popular for being a staple in the gluten-free diet. However, potato starch is a well-known thickener used for preparing delicious condiments and dishes which need heavier consistency. Usually, these food items include sauces, gravies and soups.

Potato starch is also used in other recipes like noodles, hotdog sausages, potato chips, bakery cream and wine gums. It can bring in either a crispy texture or a thicker consistency. In certain desserts like cakes and pies, it is used as toppings or glazing. It is especially useful in some gluten-free baking.

On the other hand, potato flour can be used for any recipe involving potatoes to enhance its taste. Along with gluten-free baking, you can also use it in general baking by combining it with other typical flours. The most common items prepared this way are bread and roll.

In terms of nutritional value, potato starch falls a little short. Since it goes through a massive amount of processing in its production, this ingredient is almost stripped off its natural protein and fat quotients. The only nutrient you can expect from potato starch is carbohydrate.

Comparatively, you can get more nutritional values from using potato flour since it doesn’t have to go through that much processing. Although it is 94% carbs, potato flour has a bit more protein and fat than the potato starch. Besides, it is also a good source of vitamin B6 and potassium.

By using potato starch in your food preparation, you can help you to regulate the blood sugar levels. Since it is resistant starch, it doesn’t change while going through your digestive system. The potato starch also improves insulin sensitivity and helps people with metabolic syndrome.

Besides, it introduces more good bacteria in your gut. After you consume food having potato starch, the bacterial fermentation occurs in your large intestine and produces short-chain fatty acids.

Potato flour can boost your immunity, blood condition, mental health and more with its impressive portions of vitamin B6. It also helps to maintain your normal blood pressure and nervous system.

The potato starch looks like white powder. Under a magnifying glass, it appears as large round granules sized anywhere from 5 to 100 micrometers. In terms of appearance, it has a striking resemblance with cornstarch.

On the other hand, potato flour seems more like wheat flour according to both color and texture. This fine powder can be white or off-white.

If you don’t want the thickening agent to add any more flavor to your recipe, the potato starch will be a perfect choice. Undergoing so many complex chemical modifications, it comes out as completely flavorless.

But if you are looking for more potato flavor in your dish, go for potato flour.

When you go out to purchase either of them, you will notice a significant difference in their labels. In the ingredients section, potato starch will have either vegetable starch or potato extract. This part of the flour’s label will show whole potatoes as its primary ingredient. So the flour is more natural than the starch.

Can Potato Flour And Potato Starch Be Used Interchangeably? 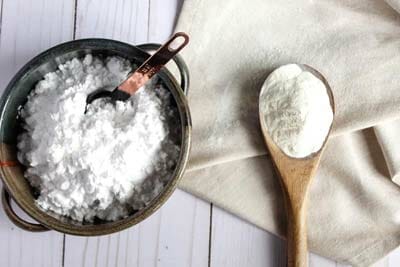 While it initially seems like these two can be used interchangeably, they are actually too different from each other for serving such purposes! They differ drastically in taste, weight and impact on food. As a result, replacing one with the other can result in an unwanted outcome for your recipe and diet.

For instance, if you try including potato flour to thicken up the sauce instead of potato starch, it will become sticky like glue! So definitely stay away from using them interchangeably.

So, here goes our Potato Starch Vs Potato Flour comparison. Even though potato starch and potato flour share the same vegetable source, they are not similar enough to be each other’s substitute.

Therefore, when you go to grocery shopping next time, remember to only get the item your recipe requires. When used right, both of them can make your dish appealing and improve its quality.