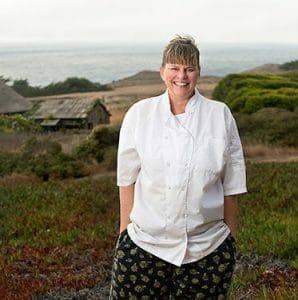 The Sea Ranch Lodge and Black Point Grill is fortunate to have Executive Chef Rebecca Stewart and her thirty-plus years of professional experience to share with her guests and diners.

Rebecca holds to traditional preparations and with absorbing passion plays with wonderful expression, emphasizing fresh and seasonal ingredients, showcasing her attention to detail. “Not afraid of flavor” is her mantra. She delights in taking risks with her creations.

Chef Stewart’s life and career has been centered around food, entertaining, and art. She has had the pleasure of working with and gained inspiration from Jacques Pepin, Hugh Carpenter, Perla Meyers, Diane Kennedy, Marzal Hazan and Madhur Jaffrey, among others.

Stewart spent many years in Victoria, British Columbia, there she honed her seafood cooking skills at two locales: Her self-named award-winning restaurant, “Rebecca’s”; where it was named in the best 100 restaurants in Canada ten years running; and The White House Restaurant and Inn, featuring new world comfort food with wonderful in-house preserves, breads, and house-cured charcuterie.

The best part about Rebecca’s cooking is that, for better or worse, she refuses to be bored. The menu will change with the seasons, keeping some favorites but bringing on new dishes and accompaniments depending on what ingredients are best at the time. Chef Stewart’s famous cioppino, a show-stopper of ocean prawns, day boat scallops, corvina fish, shellfish, and freshwater prawns steamed in a red chili sauce, topped with a Dungeness crab and herb crostini is hard to beat, and the fresh coastal catch that the Black Point Grill enjoys daily is featured prominently in Stewart’s current rendition of her cioppino.

And guests should note that the kitchen is adaptable. Rebecca notes, “Anything can be vegetarian and the majority can be vegan, due to about 90% of her stocks are vegan”. With vegetables, fruits, and spices to flavor them rather than utilize beef or chicken stock; and additionally, coconut milk is often used as a base and no flour is used to thicken, so gluten-free diners also have many options at the Black Point Grill.

Diners of all palates are welcome at the Black Point Grill! Bon appetit !