You’re browsing an online shopping store for purchasing kitchenware. As you scroll down the list, you find a range of griddles and skillets of different sizes.

You know that one of them will come in handy for preparing breakfast, lunch, or dinner, but aren’t sure which one to pick.

Fret not, because not everyone knows which one they really need. While both skillet and griddle  are cookware and come in handy at times, some technical aspects set them apart, thus affecting the food you cook.

To clear up the confusion, we have discussed most common griddle vs skillet comparison in this guide. Keep reading, and eventually, you’ll be able to figure out what you need!

What Is A Griddle?

A griddle has a large cooking surface with lower walls. Technically, there are two types of griddles, which we are going to explain for better understanding. 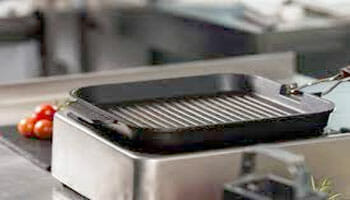 A griddle pan is typically square or rectangular-shaped with a handle on one side. It has a non-stick surface and is often made of cast iron.

The material of a griddle pan makes it ideal to be used on all types of stovetops, including gas and ceramic. You can also use it on induction or put it in the oven to keep food warm.

Griddle pans come with flat and raised surfaces. Flat griddle pans have a completely flat surface and are ideal for preparing foods for breakfast, such as pancakes, sausages, and eggs.

Those with raised surfaces let you grill steak and sandwiches while leaving sear marks as outdoor grills would. The raised bars also drain away unwanted fat from the food.

When you’re shopping for a griddle pan, you’ll typically find them having a width of 10 or 12 inches. 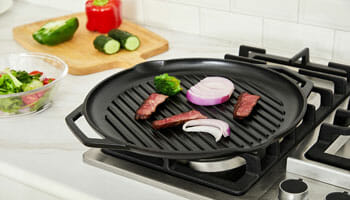 Griddle plates are commonly found in restaurants and now also at homes. This type of griddle is large and rectangular-shaped, resembling that of a baking tray. Most griddle plates also have handles on both sides.

Griddle plates are designed to be used for cooking at high temperatures. They allow even heat distribution and hold up the heat well for some time, thus keeping food warm.

When it comes to choosing a griddle plate, you can either buy one to be used on the stovetop or the one that operates in electricity.

Electric griddle plates are portable and are a favorite choice among people who love going on camping trips.

Griddle plates are found in various sizes. These usually have widths ranging between 20 inches and 72 inches.

Related accessories that you need if you are griddle lover like me:

Griddles are usually large, so they have plenty of space to accommodate large batches of food.

Think about preparing delicious meals for a party- you would always want to get things done in the shortest time possible.

When you are grilling steaks and chicken, grease comes out of the food. Eating the greasy food is not only unhealthy but it also doesn’t let you enjoy the actual taste of the food to the fullest.

The raised surfaces in most griddles are there to drain off the excess grease from food.

The ridges in most griddles not only drain off fat from food, but also leave evidence that it has been grilled. While grill marks don’t affect the flavor of food, they make it look more palatable.

Since griddles are made of cast iron and have a large surface area, they can withstand high temperatures. That means you can easily achieve a smoky flavor just as you would with a barbecue grill.

Griddle requires instant cleaning as soon as you are done using it. If you leave it with grease and food debris, there will be an accumulation of a layer which in turn carbonizes into a hard layer, making it very difficult to remove.

Cooking on such a surface will not cause the heat to distribute evenly and so affect the taste.

Produces A Lot Of Smoke

Since you will be cooking at high temperatures in the griddle, there will be clouds of smoke, so proper ventilation is needed.

It is recommended to use griddles outdoors if you are planning to cook at high temperatures.

What Is A Skillet?

A skillet is often mistaken as a frying pan because of its similar appearance. The only difference between these two types of cookware is that a skillet has deeper walls than a frying pan.

Skillets are round in shape and are typically made of cast iron. Because of the cast iron, the cookware becomes durable, and it holds more weight, which makes it ideal for high-flame cooking.

You will also find lighter skillets made of other materials, like aluminum, copper, and steel.

A skillet’s design allows you to fry, sauté, and roast foods. You can use it to prepare vegetables, French fries, steak, pancakes, and a wide variety of items.

Some skillets are designed to be used in the oven so that you can finish off your cooked dishes by baking them.

Skillets come in different sizes, with the smallest ones being only 3.5 inches in diameter while bigger ones measuring as large as 16 inches.

Skillets are small, lightweight, and easy to carry. These usually come with a single handle which makes it easy to toss and turn food.

Since skillets are lightweight, they are easy to clean. If you are using a cast iron skillet, you won’t have a hard time scrubbing off the leftover food because it comes off easily without the need for soap.

Skillets are less expensive than griddles, so if you are looking to buy cookware for regular use and one available within a budget, you can go for a skillet.

Cast iron is known to get very hot and so keep the food warm for a long time unlike other materials. The flat design of a cast iron skillet causes even heat distribution so that the food can get cooked on all sides.

Cast iron skillets are durable, so they are an ideal choice if you wish to use them in the long run. The material becomes impervious to rust and forms a non-stick surface with regular seasoning.

Does Not Leave Sear Marks

Skillets are flat and don’t have ridges on the cooking surface, so you can’t expect to have grilled food with sear marks.

Not To Be Used Outdoors

Unlike griddles, skillets have a smaller surface area. Although there are cast iron skillets available, the small surface area isn’t ideal to be used at high temperatures.

Not Ideal For Grilling

Skillets are designed for pan-frying, sautéing, roasting, braising, and other cooking methods. Since this type of cookware has a small surface area and a flat surface, they aren’t ideal for grilling.

Skillet Vs Griddle: What Are The Differences Between Them?

Whenever you see skillet or griddle, you will be able to identify them by taking a look at their cooking surfaces.

A skillet has a deeper cooking surface with walls that slant inwards. This slanted design allows you to flip and turn food before you start plating it.

With a skillet, you can fry or roast food as long as you don’t need a large surface area. It is mostly used in indoor cooking.

On the other hand, a griddle has lower walls, which means it’s not suitable for tossing food.

It also has a larger surface area, which makes it ideal to be used to prepare food in large quantities. You can use it to grill or fry food either in the kitchen or outside on the BBQ.

Since griddles are usually large, they come with a handle on both sides for easy carrying.

By contrast, the lightweight feature of a skillet eliminates the need for double handles. It comes with a straight handle which you can hold comfortably while cooking, tossing, or plating food.

Skillets are typically made of various materials, like aluminum, stainless steel, copper, and cast iron.  Aluminum and copper skillets have a ceramic coating which prevents the metal from reacting with the food.

Stainless steel and cast iron skillets are not coated but are designed to enhance heat conductivity.

On the other hand, griddles are mostly made of cast iron without any coating on the surface.

Both cast iron griddles and skillets are sturdy and require seasoning to allow easy release of food and prevent the formation of rust. This material also holds heat well compared to other materials.

Griddles and skillets are different items having different capabilities, so they deliver food flavor in their own way.

A griddle is mostly used outdoors for cooking traditional barbecue foods, such as steak, chicken, sausages, and burgers.

Unlike a skillet, it grills food properly and leaves a smoky flavor. Also, it can cook food at higher temperatures to improve the taste.

On the other hand, skillets can’t give you the same smoky flavor as griddles because they can’t reach very high temperatures. These are ideal for frying food, such as shrimp, vegetables, and eggs.

Unlike grills, griddles are more portable because they don’t require a stand. Because of the large surface area, they are great for preparing large batches of food, only if the stove is big enough to accommodate the griddle.

On the other hand, skillets are more portable than griddles because of their small size. They easily fit on the kitchen stove and can be used to toss food in the air.

However, the small surface area isn’t ideal for cooking food in large batches.

Griddle Vs Skillet: Which One Should I Buy?

There’s no right or wrong when it comes to choosing griddle or skillet because it all depends on personal preference.

If you are looking for a cookware for regular use in the kitchen, a skillet can be a good option as it is small and easier to maintain.

But if you want to cook plenty of food for a large number of people, there’s nothing better than a griddle.

Instead of choosing one, you might even want to have both types of cookware available in the kitchen, for you never know when one of them comes in handy.

Hope this guide help you to understand difference between skillet and griddle. if you happy with our writing then please share this post with your friends and family.