If you are one of them, you are in luck. The post below consists of my personally tried and tested method to clean such an oven without spending hours.

Cleaning the oven is a five-step procedure that involves using dry paper towels to remove the residue, boiling the water to break down stubborn food remains, removing the residue, rinsing it, and re-seasoning it.

Below, I will go into the detail of each step to provide you with a handy guide. 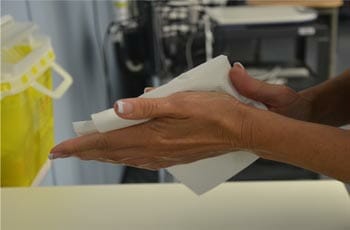 Firstly, clean the oven with dry paper towels. That will help you take care of most of the residue. In case stubborn residue is present, you can spray a little bit of water on the paper towel and wipe the interiors. 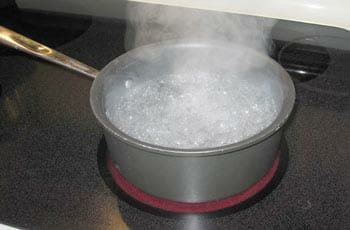 The step above will take care of any residue which is easy to remove. However, Dutch ovens often consist of burnt residue as well. For the same, fill it with water and boil that water. It will help you in breaking down the burnt residue.

3. Turn Off the Heat

Once the water boils, take the oven off the stove. You must then remove the water inside and use a scrubber to scrape out the food residue. It is best to go with a mesh scrubber. 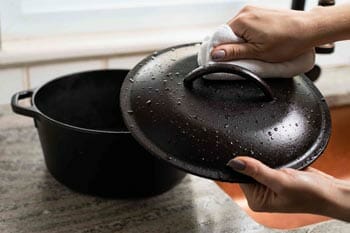 After scrubbing, use fresh water to rinse it. Instead of keeping it wet, use dry paper towels to wipe it clean.

5. Season It with Oil 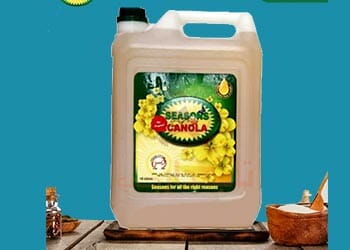 A Dutch oven can work appropriately only when it is seasoned with oil. That is why this little step is pretty vital.

Now, rub a little bit of cooking oil on the interior and exterior of the oven. You need to use a regular paper towel to do so.

Before you store it or start using it, take another paper towel to wipe away excess oil from the oven.

I use these five steps with great success to always get a sparkling clean Dutch oven.

In case you want to make the above method even more effective, you can slowly add baking soda while the water boils. It will bubble up and foam. That is why you should add it gradually, spoon by spoon.

Baking soda can easily dissolve organic residue, including grease and other leftovers. Adding it to water will therefore help you remove the burnt residue easily using the mesh scrubber.

Cleaning such an oven requires a very precise method. It requires you to avoid a few common pitfalls, which I will highlight below.

Harsh soap solutions can easily lead to high wear and tear. That’s why you need to avoid using them.

2. Do Not Use Dishwasher

The oven is not something that you can directly put into a dishwasher. If you do so, you will end up damaging it. The best way is to follow the procedure above.

3. Do Not Store the Oven Exposed to Air

Storing the oven requires seasoning with oil. As I highlighted above, the last step is to apply the layer of oil, even after cleaning it.

When you store it out in the open, the oil seasoning will get impacted. It means that the oven will require some preparation before you can use it again.

Not only that, if you store it out in the open, the wear and tear from the weather elements is on the higher side.

These two reasons make it necessary to store the oven enclosed in a proper storage cabinet or the box.

4. Never Use a Metal Brush

The procedure above requires you to use a scrubber. It is a good idea to go with a fine mesh but not something like a metal brush.

Removing the residue with a metal brush is easy, but it will also damage the surface. No longer will you get something similar to a non-stick surface once it gets damaged. You can use grill brush also to avoid surface damage or scretch.

So, under no circumstances should you use a metal brush to remove the residue.

5. Do Not Neglect It

Cleaning an oven is a cumbersome task. Whether dealing with the Dutch or microwave oven, cleaning it is not easy.

That, however, does not mean that you start neglecting your oven.

Even though cast iron is pretty sturdy, years of neglect can ruin any appliance or cooking utensil. The same is true for a Dutch oven.

To avoid this, it is a good idea to clean it from time to time.

#1. Can you spoil a Dutch oven made of cast iron material?

Such ovens usually last for generations. However, for the same, frequent cleaning and seasoning are required. In case you do not season it appropriately and start cooking in it, they suffer from extensive wear and tear, and you can end up damaging the oven.

In some cases, some cleaning agents can also spoil the oven. (Covered below)

#2. What is the black substance coming off cast iron ovens?

Most likely, the black substance which you notice is nothing but the burnt residue. If you precisely follow the guide above, you will be able to remove this burnt residue quite easily.

Another option which you have is salt. The salt will break down the black stuff which you notice in the oven.

#3. Why does my Dutch oven look blotchy?

The reason your oven is looking blotchy is that you have applied an uneven layer of oil. If you apply too much oil in certain areas and little in others, the resultant non-stick surface will be blotchy.

#4. Is it safe to clean the Dutch oven with bleach?

Ideally, you shouldn’t clean a Dutch oven with bleach. The reason for the same is that it can lead to discoloration. If you dilute it properly, you can utilize its cleaning properties[2].

The problem is that if you do not dilute it perfectly, the concentration of bleach will be on the higher side, leading to discoloration and damage to cast iron.

That is why, instead of trying to dilute bleach precisely, it is a good idea to avoid cleaning the oven with bleach.

#5. How do you clean a cast iron oven with salt?

While boiling water, you can add salt to it to break down the burnt or stubborn residue inside the oven. The procedure is the same as above. Salt will help you break down the residue easily.

Yes, vinegar can damage the oven. Since it is acidic, it will react and accelerate the rusting process.

It might raise the question; can you use vinegar while cooking in a Dutch oven?

You can use vinegar in limited quantities. Also, during cooking, it is unlikely that vinegar will directly come in contact with the oven surface itself, as there will be oil seasoning and quite a few ingredients.

#7. Can you use steel wool on a Dutch oven made from cast iron?

No, you cannot. A mesh scrubber is a much better option. Steel wool can damage the oven’s surface and also deteriorate the seasoning.

#8. How do you get brown stains out from cast iron Dutch oven?

Adding baking soda while boiling water in it should do the trick. However, rather than using a mesh scrubber, it is good to use a wooden spoon to rub the surface to remove the brown stains.

How Do You Remove Severe Rust from Cast Iron Dutch Oven?

The mesh scrubber can help you get rid of more severe rust from such an oven. However, before using it, it is better to rinse the Dutch oven with warm water. After that, removing the rust with a mesh scrubber is easy.

Can You Heat an Empty Dutch Oven?

Heating an empty Dutch oven is not the solution for cleaning or cooking. You have to put the water in it to break down the residue.

Are You Supposed to Wash a Dutch Oven?

No, washing such an oven is not necessary. Washing will impact the seasoning as well, which will require re-seasoning again and again.

Why Does Food Stick to Your Dutch Oven?

If your food sticks to your Dutch oven, it indicates that your seasoning is not appropriate. You have to evenly apply oil to the cast iron surface to ensure that the seasoning is even and the food gets cooked properly.

Apart from that, you can also try cooking food with less fat. Those are less likely to stick to the surface of your Dutch oven.

After a lot of effort, I have formulated this procedure to clean a Dutch oven. With no experimentation involved and an easy cleaning procedure, there is no doubt that this is one of the efficient methods to maintain your oven.

The next time you’re wondering how to clean cast iron Dutch oven, use the handy guide above.