The variety of Korean cuisines offer a healthy and delicious alternative to our usual dinner items. Their inclusion of spices and fresh ingredients are the main reasons behind such high popularity.

Apart from the cuisines, some of the cooking materials originating from South Korea have also become a common element in our kitchens. Two of such popular ingredients are Gochugaru and Gochujang. They sound similar because they both involve chili.

The common part of “Gochu” means “chili” in the Korean language. So, as you can assume, both of them are usually used to make a dish spicier. However, their appearance, application and many other aspects are quite different from each other! Let’s know more about those by comparing Gochugaru vs Gochujang!

Gochugaru is basically the Korean version of our usual chili flakes. Since their culinary culture tends to be a lot spicier, their flakes are also much hotter than usual. It is one of the staple ingredients in Korean cuisine used mainly to add a delicious spiciness to any dish.

According to some Korean historians, Gochugaru has been in the nation either since the 1200s or even hundreds of years before that! However, the more popular opinion by experts is that it didn’t exist in the Asian regions until the 16th century.

It is known by many names in foreign countries. For example, it is called Korean chili flakes, chili powder and even red pepper sometimes by the English-speaking communities. However, you need to know what real Gochugaru looks like to avoid buying the wrong product among them for mislabeling.

All You Need To Know About Gochugaru 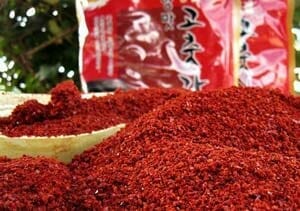 Contrary to popular belief, Gochugaru is not limited to only introducing chili flavor or spiciness into your dishes. Although pepper flakes are its main ingredient, it actually adds some fruitiness, sweetness and a smoky flavor to your cooked item. That is why it is more versatile than other hot ingredients like cayenne pepper.

Gochugaru is made by deseeding, drying and crushing chili peppers. The ones which are dried naturally by sunlight are called taeyangcho. Some peppers are also dried mechanically with the help of machines. However, the traditionally dried taeyangcho is preferred by most.

The dried chilies are then cleaned up and then thrown into the blender to get the end result. If you want its texture to be even finer, you can take the help of a rice mill instead.

It has the bright red color you may have seen in chili powders or red pepper. This shade is uniform throughout the pile or container since the pepper seeds are removed beforehand. Its texture is somewhat of a blend of fine cayenne powder and coarsely crushed flakes. This is a result of grinding the seedless peppers well.

There are many varieties of Gochugaru which come with an equally varying range of spiciness. In terms of Scoville heat units, this spectrum can extend from as low as 1,500 SHU to as high as 10,000 SHU. So it depends on you or the guests to decide how spicy your Gochugaru needs to be.

If you want the dish to be a challenge for others or yourself, you can include the hottest variation called Maewoon Gochugaru. For those who want a simpler dish, use the much less spicy Deolmaewoon Gochugaru.

The native Koreans use plenty of Gochugaru in many dishes since they are used to having spicy food in all meals. So the use of this item can be found in a wide range of Korean cuisines.

Among them, the most popular ones which are also cooked in other countries now, include spicy beef soup (yukgaejong), spicy noodle soup (jjampong) and the well-known reddish vegetable dish called kimchi.

Another signature condiment from Korean cuisine that is now popular in many other countries is Gochujang.

It is a thick red chili paste that comes with a splash of sweetness to make your dish even more flavorful! People love it so much that an annual festival dedicated to Gochujang is held in Sunchang of South Korea.

This is where the production of Gochujang originated. Chili peppers came to these East Asian areas from America through the Portuguese traders. The ancient writers mentioned this thick chili paste as “gochojang” which was the initial name of Gochujang.

All You Need To Know About Gochujang 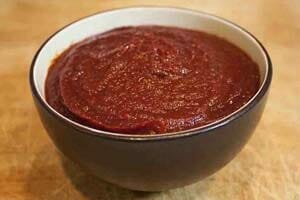 Much alike Gochugaru, Gochujang also provides a flavor that is spicy, sweet and smoky all at the same time. Additionally, it has some saltiness and other types of taste as well.

However, you should never use too much of it in the dish to bring these flavors. You will only need to use a teaspoon of it while making soups or marinades for enhancing its savouriness.

The main ingredients required to make Gochujang include glutinous rice, red chili powder or Gochugaru, grounded fermented soybeans and salt. To enhance its sweetness, a little bit of sugar, honey or syrup is also added here. For making distinct flavors, you can use sweet potato or pumpkin to prepare it.

Its sweetness comes from the glutinous rice. The traditional way to prepare it is by fermenting the paste naturally in the backyard earthenware called jangdok.

The texture of this red pepper paste is very thick. It appears a little dark red in color. Compared to whole peppers or any other chili condiment, Gochujang is much darker. That is why you often see the Korean spicy noodles, buffalo wings and similar food items bearing the deep crimson color.

The spiciness of Gochujang products can vary so much that it has its own scale of heat measurement. The units of this measurement system are called GHU which is short for Gochujang Hot-taste Unit.

Since it alone can bring in multiple flavors to a dish, Gochujang is used frequently for many signature Korean dishes like the tubular rice cakes called Tteok-bokki and the colorful rice bowl called bibimbap. Other food items where this thick chili paste is used are soups, stews, salads and meat dishes. 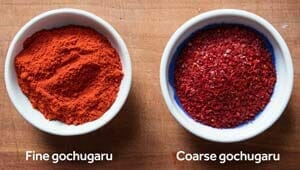 Although they both are made with red peppers, their textures are completely different. Gochugaru is a very fine powder while Gochujang is a thick paste. In terms of color as well, they differ a little. Gochugaru has the bright red color you see on peppers. Gochujang looks darker and has a crimson hue instead.

Since Gochugaru is a powder, the red peppers need to be deseeded first. Then they are dried using machines or by keeping under the sun. After that, the dried peppers are crushed into its final form through a blender or something similar.

In contrast, the thick paste of Gochujang is made by mixing all the ingredients and fermenting it in the backyard earthenware.

They both deliver a spicy flavor that also has a hint of sweetness and smoke. Gochujang also adds some saltiness which makes the dish even more flavorful. It has other extra sources of flavors like glutinous rice and fermented soybeans. So the paste can add more layers of taste to the dish.

Both Gochujang and Gochugaru are considered to be staple ingredients in traditional Korean cuisine. You will find them in the preparation instructions for spicy soups containing beef, noodles or similar items.

Gochugaru is also used to prepare the spicy fermented vegetable dish called kimchi. On the other hand, gochujang is used for cooking stews, salads, tteokbokki, bibimbap and marinated meat dishes.

In case of storage, Gochugaru provides more conveniences than Gochujang. The latter is a moist paste that can lose its good qualities if left in room temperature for an extended period. That is why you will need to keep it inside the refrigerator at all times. You can keep the container of Gochugaru powder outside on shelves.

Gochugaru And Gochujang: Are They Interchangeable?

Despite coming from the same source of red peppers, these two spicy ingredients are not really interchangeable. The main two reasons behind that are consistency and flavors.

Gochugaru is a fine dry powder while Gochujang is a thick paste. So you cannot replace one with the other while cooking if they are unavailable. Besides, the former cannot provide a layered flavor like the latter. The powder cannot introduce saltiness like the paste.

One possible way of using Gochugaru as a Gochujang substitute would be to add water to the powder for turning it into a paste. Even then, you will need to mix in several ingredients for matching the flavor. As a result, it will turn into a tiring and time-consuming process.

On the other hand, using Gochujang instead of Gochugaru comes with a lot of issues. Firstly, the paste may not mix as well as the fine powder. Secondly, this fermented condiment may not deliver a taste equal to that of dried pepper flake powder. So the dish may fail to deliver the right flavor at serving.

As you can see by comparing Gochugaru vs Gochujang, there are a lot of differences between these two closely related spicy ingredients.

They are completely unalike in their textures and storage conveniences. In terms of taste, the flavors they offer vary significantly as well.

Depending on your palate and usual preferences of food items, you can choose either one or both for your daily culinary practices.