Italians love their bread. Some even treat it like a snack. And their love for bread made them experiment with the dough so much that we now have different kinds of bread available. Among them, there are two that people get confused between a lot.

Yes, we are talking about focaccia and ciabatta. Both originated in Italy and utilized the same essential ingredients, making people confuse one with the other.

However, after this discussion regarding focaccia vs ciabatta, you will know what distinguishes them. We will fill you in on every detail regarding the kinds of bread and what sets both apart to make your understanding clear.

A Brief About Focaccia 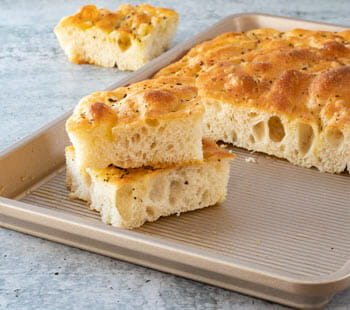 The name focaccia comes from the Roman words “Panis Focacius,” which stand for “hearth bread,” referring to traditionally baked bread in the coals during Roman Empire. The recipe for the bread consisted of olive oil, water, coarse flour, salt, and a minimal quantity of yeast back then.

Those ingredients would eventually make you a pretty plain piece of bread. The bread was usually torn and dipped into salty soups.

However, the Italian's love for bread evolved. And they experimented with the recipe and it now has a rich nutty and chewy flavor.

Nutritional Facts of Focaccia ( one slice or 57 grams)

Three things make the Focaccia bread stand out. And in this segment, we will go through each of them.

First of all, the Focaccia bread is pretty lightweight. Some will even tell you that the bread has a cake-like consistency. You will hear many referring to the bread as pizza dough. None of the descriptions would be wrong because the texture is that unique.

If you ever had focaccia before, you might have noticed that it does not come in slices. That is because the bread is not baked as loaves. Instead, it’s baked as a flatbread.

The sky is your limit when you are serving Focaccia bread. You can present it as an appetizer, antipasto, snack, or even table bread. And if you get creative enough, you can serve it with tons of dishes with this bread, such as Mashed Potatoes and Hummus.

A Brief About Ciabatta Bread 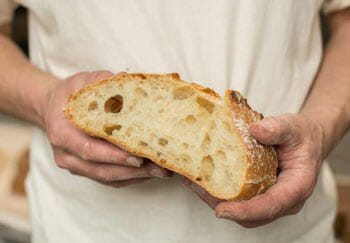 Now, let us focus on the ciabatta bread. This type of bread does not belong to the flatbread category. It does not even remain in the loaf bread category. Instead, the bread is somewhere in the middle. Usually, the bread will be somewhat flat and broad at the same time.

You can also bake it in different ways. Even though the cooking process might differ, the bread will have alveolar holes. Nonetheless, the bread recipe will usually have strong flour and much wetter dough than any traditional French bread.

As the bread is baked with a lean formula, it is known to have a crisp crust on the exterior. On the inside, there will be irregular, large, open crumb grain. In other words, you will notice alveolar holes inside the bread, which is what makes the ciabatta bread unique.

Nutritional Facts of Ciabatta ( one slice or 57 grams)

Just like Focaccia bread, three things make the Ciabatta bread stand out. And here is brief information regarding each of them:

The first thing that makes the ciabatta bread stand out is the dense consistency. Even though it has large irregular holes inside, you will notice a chewy texture. Also, the bread does not feel that light.

Ciabatta is usually baked as loaves. However, a loaf of the ciabatta will not be tall. Instead, you will see that the bakers will bake the bread in flat loaves.

Usually, people use ciabatta as sandwich bread, and it can surely make delicious sandwiches. Other than that, the ciabatta bread does not have much of a use case. Of course,  you can have the bread with soup if you want to.

Focaccia vs. Ciabatta: The Key Differences Between Them 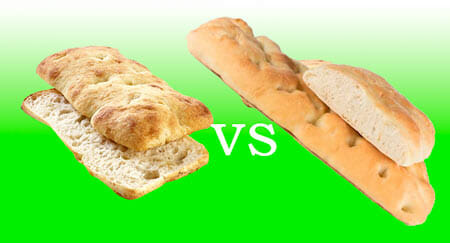 The focaccia and ciabatta bread are not the same types of bread. There are plenty of things that set them apart. However, among all of them these are their significant differences:

Type of the Dough

The first thing that sets both types of bread apart is their dough. On the one hand, ciabatta utilizes a lean formula. However, it will rely on solid flour to get a dense texture. On the other hand, there is focaccia, which requires a fluffy type of dough.

The second thing that makes the bread different is the texture. Focaccia bread will have a light texture inside. That is why many refer to it as cake-like bread. In comparison, the ciabatta will have a dense texture inside. And even though the bread has irregular holes inside, it will be chewy.

The baking process is another thing that makes the two bread different. Focaccia belongs to the flatbread category. On the other hand, ciabatta bread will come in loaves.

The last thing that separates focaccia and ciabatta is the versatility that focaccia has. As it has a cake-life and fluffy texture, you can use it as a snack, base for other dishes, or appetizer. However, the same thing does not apply to ciabatta. That bread is best used as a sandwich bread only.

Can I add cheese to my focaccia recipe?

The thing about the focaccia recipe is that it is highly customizable. You can add your twist to the recipe and make your version of the bread. That means cheese focaccia is indeed possible!

What cheese goes with focaccia?

Focaccia has a good resemblance to pizza dough. Considering that, you can easily use mozzarella cheese on top of it. However, parmesan cheese goes well with the bread as well.

How versatile is ciabatta?

Ciabatta, on its own, is not that versatile. However, you can take the bread and customize the recipe. There are many unique recipes available such as cheese ciabatta.

To sum things up, the difference between focaccia and ciabatta lies in the texture, versatility, recipe, and cooking style. Despite their differences, both kinds of bread have one thing in common- their deliciousness. You will indeed have a great experience by pairing one of them with any of your recipes.